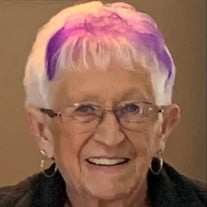 Patricia (Pat) Ann Witham., 84, a resident of Ephrata, passed away peacefully at her home following a courageous battle with cancer, September 23, 2021. She was born February 14, 1937 in Spokane, Washington to Floyd Hansen Sr., and Nialeen Hampton Hansen. She graduated from Davenport High School in 1955. She married her high school sweetheart, Gary Henderson, soon after graduation. Gary passed away in a tragic drowning accident in 1956. They had two children, Jim and Garyanne. Pat met her husband William “Bill” Witham, on a blind date while he was stationed at Fairchild Air Force Base in Spokane, Washington, and they were married on Feb. 8, 1958 in Davenport, Washington. For the next 22 years, Pat and Bill raised a family while Bill served in the U.S. Air Force as an Air Force Office of Special Investigations Agent and they relocated to various bases in the United States including Clark Air Force Base in the Republic of the Philippines. While they were stationed in the Philippines, they traveled to Japan, Taiwan, Thailand and various places in the beautiful Philippines. Pat was employed by the Army-Air Force Exchange Service as an Exchange Detective for 4 years in the Philippines; when they relocated to Travis Air Force Base at Fairfield, California, she continued with her same position. In 1988 after Bill retired from United Airlines, Pat and Bill moved their home from San Bruno, CA to Ephrata to be closer to her mother and brother. Soon after the move to Ephrata, Pat was employed with the Grant County Historical Museum as the Director and continued that position for the next 30 years until her passing. Pat was an inspiration to all as she continued her dedication to her job curating a historical legacy of Grant County. Pat and Bill spent their winter months traveling with friends on several Caribbean cruise trips. One of their most memorable trips was their trip through the Panama Canal in 2009. Pat was an active and dedicated member of the American Legion Auxiliary, serving in all positions and most recently Chaplain. She spent countless hours dedicated to supporting the American Legion and honoring the veterans, military, and their families. She is survived by her three children, son James and wife Kim Witham of Rogersville, Tennessee., daughter Garyanne Witham of Benica, Calif., daughter Deanna and husband Terry Niemeyer of Taylor, South Carolina; 9 grandchildren, 20 great-grandchildren, a brother-in-law, Stanley (Shirley) Witham of O’Sage, Iowa; and Audrey (Jack) Hastings of Austin, Minnesota and niece Sheryl Dotson (Curt) of Ephrata, Washington. She was preceded in death by her husband William “Bill” Witham, her daughter Audrey Witham, her father, Floyd Hansen Sr., mother Nialeen Slater; her brother Floyd Hansen, Jr. There will be a “Celebration of Life” service at the Art Semro Post No. 28 American Legion Hall in Ephrata on Saturday, October 23, 2021 at 12:00 pm. A luncheon will follow at the American Legion. If desired, memorials may be made to the Grant County Historical Society or the American Legion Auxiliary in lieu of flowers. Internment for both Pat and Bill will be at 9:45 am on Friday, October 22, 2021, at Washington State Veterans Cemetery, Medical Lake, Washington. Please express your thoughts and memories for the family at www.nicolesfuneralhome.com/obituaries

Patricia (Pat) Ann Witham., 84, a resident of Ephrata, passed away peacefully at her home following a courageous battle with cancer, September 23, 2021. She was born February 14, 1937 in Spokane, Washington to Floyd Hansen Sr., and Nialeen Hampton... View Obituary & Service Information

The family of Patricia Ann Witham created this Life Tributes page to make it easy to share your memories.