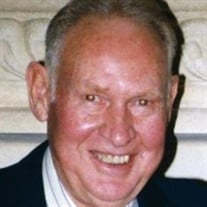 Ralph O. Stalsberg (Red) 1923-2016 Our father, grandfather, husband, uncle and friend passed away Thursday, February 11, 2016 in Ephrata, Washington. Ralph was born August 2, 1923 in Vancouver, Washington to Alf and Karla Stalsberg. He graduated from Potlatch High School, where he participated in football, basketball, baseball and track. Ralph left Potlatch after high school and went on to work various jobs. He worked for a shipyard in Seattle and was also a journeyman boilermaker for Todd Dry Dock until he entered the service. Ralph joined the Marines December 11, 1942. He trained in North Carolina to become an aircraft mechanic and was stationed in Honolulu, Hawaii. He spent 39 months in the service until he was honorably discharged in April 1946 as a sergeant. Ralph married the love of his life Ruthie Waldher, May 27, 1950 in Spokane and they had two children Lonnie and Sandra. Ralph was a true businessman who loved a challenge. In 1958, Ralph and business partner Rex Stuart formed S & S Sand & Gravel Inc. They ran a successful business for 15 years crushing rock for roads in the states of Washington, Idaho and Colorado. In the fall of 1973 they auctioned off all of the assets and liquidated the company. Ralph went on to start his own company, Ralph O Stalsberg Inc. and later joint ventured with Jim Hutchinson and Ellensburg Cement Products Inc. They worked together in the sand and gravel business until he retired in 1990. In 1980 Ralph and his son Lonnie partnered to buy Ace Disposal in Salt Lake City. It was Lon’s vision and business intuition and Ralph’s expertise and financial support in the early years that enabled the company to prosper and grow from one truck to a fleet of 150. Ralph’s favorite phrase was “Business is always picking up” Ralph is survived by his son Lonnie (Cyndy) Stalsberg and daughter Sandy Huntington, five grandchildren: Angela (Paul), Chris (Elizabeth), Kyle (Lauren) Matt (Melissa) and Kate. Six great-grandchildren: Danielle, Michael, Alyssa, Samuel, Ben and Violet; two nephews: Roy (Debbie) and Norman (Denise) and two nieces: Laura Spencer and Melissa Stalsberg. Ralph was preceded in death by his parents, wife Ruthie, brother Roy, sister-in-law Barbara and sister Alice Holladay. A special thanks goes to his daughter Sandy for all the Love and care she provided for her Dad. She made sure he knew the stock report and sport scores every morning! The family would like to thank the Coolidge House for their kindness and care, and his many special friends who were always there for him. A Celebration of Life will be held at Nicoles Funeral Home in Ephrata, Wash. at 1:30 p.m. on Saturday, February 20, 2016. Ralph will always be remembered for his love of family and friends, positive attitude, work ethic, integrity, great energy, generosity, being a role model and love of life. We say goodbye to an amazing man, we were so blessed to have him in our lives. In Lieu of flowers, memorials may be made to Casey Eye Institute 3375 SW Terwilliger Blvd. Portland, Oregon 97239 Please express your thoughts and memories for the family at www.nicolesfuneralhome.com. Arrangements are under the care of Nicoles Funeral Home of Ephrata, Wash.

The family of Ralph Otto Stalsberg created this Life Tributes page to make it easy to share your memories.