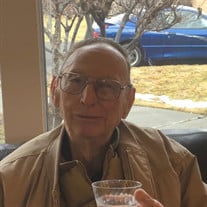 Reed Lawrence Benedict, 99, went to be with his Lord and Savior Jesus Christ while at McKay Healthcare and Rehabilitation Center in Soap Lake, Washington on October 26, 2020. Reed was born on September 30, 1921, in the small town of Anatone, Washington to Arthur and Stella Benedict. His mother was a schoolteacher, so he had the privilege of being taught by helping the lower grades. While growing up Reed cultivated a love for farming and ranching by helping with the farm and ranch duties on his uncle’s property near Anatone during the summer months. While in high school his sport of choice was basketball, and it wasn’t long before he earned the nickname “deadeye” for the special fade away hook shot he had perfected. After graduating from high school, he enrolled in the animal husbandry program at Washington State College now University. After completing 3 years of college, he was called into the US Army to help with the World Was II conflict. After Basic Training Reed was sent to the Philippines where he soon became a platoon Sargent. During one of the platoon’s maneuvers, they walked into a Japanese ambush and several men were killed as well as several being wounded. Reed was one of those wounded. He was returned Stateside and awarded a Purple Heart. The war was drawing to an end at that time, so Reed was able to return to WSC to finish his degree in Animal Husbandry. He served in the US Army nearly 3 years. Also, while at WSC Reed was able to be a part of the National Champion men’s Intercollegiate archery team. Three National Intercollegiate records were broke by the five Cougar bowmen and their score of 5655 points raised the previous team score for the national meet by 126 points. After graduating from WSC, Reed was contacted by Dr. Enminger was the Chairman of the Animal Science Department at WSC and asked to be the herdsman at the college. He accepted the position, and it was at that time he met the love of his life, Beverly Ulrich. Beverly was majoring in, you guessed it, Animal Husbandry. They were married in March of 1949. After a time as herdsman at the college, Reed felt it was time to move on and build a life and family with his new bride. He accepted the position as herdsman with several different purebred cattle ranches over the next several years. He started with the Staley Hereford Ranch near Pullman, Washington; then moved to a ranch near Sacramento, California; and finally to a ranch near Ashland, Oregon. During those years their two boys were born. While Reed was employed at those ranches it became evident that his true desire was to manage his own farm and ranch. He also noticed that the Columbia Basin Project was receiving water and he had dreamed of farming and ranching there some day. So, in 1957 with the financial help of Beverly’s parents the couple was able to put money down on the property they owned near Soap Lake. Reed was able to grow wheat, corn, alfalfa and grass hay, alfalfa seed and even potatoes for several years. Along with the farming operation he maintained an 80 to 90 head cow herd. He also built a beef feedlot that would eventually handle 1000 plus head of fat cattle. Reed was involved with the Grant County Conservation Service as well as the Grant County Cattlemen’s Association and also served on the Grant County Planning Commission. Reed felt very honored to receive the Conservation Farmer of the year and the Good Neighbor awards as well as the Grant County Cattlemen of the year award during his time here. He truly felt blessed to have had the opportunity to farm and ranch in the great Columbia Basin and especially in Grant County. Reed is survived by his son Dean (Joyce), five grandchildren, five great grandchildren as well as numerous nieces and nephews. Reed was preceded in death by his wife Beverly, his son Richard, and his two brothers Kenneth and Harold and his parents Arthur and Stella. A graveside service will be held at 10am on Saturday, July 24, 2021 at Valley View Memorial Park in Soap Lake, 20174 Road A NE with lunch to follow at the Community Evangelical Free Church in the fellowship room, 110 Main Ave E, Soap Lake. Please express your thoughts and memories for the family at www.nicolesfuneralhome.com. Arrangements are under the care of Nicoles Funeral Home of Ephrata.

Reed Lawrence Benedict, 99, went to be with his Lord and Savior Jesus Christ while at McKay Healthcare and Rehabilitation Center in Soap Lake, Washington on October 26, 2020. Reed was born on September 30, 1921, in the small town of Anatone,... View Obituary & Service Information

The family of Reed Lawrence Benedict created this Life Tributes page to make it easy to share your memories.

Reed Lawrence Benedict, 99, went to be with his Lord and Savior...