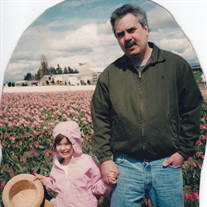 Reid Douglas Elliott was born in Everett, Washington on June 1st, 1961 to his parents Georgia and Verlin Elliott. He was raised, along with sister Jane Elliott, in Everett, where he attended and graduated as valedictorian from Everett High School. He followed his father in attending the University of Washington (Go Dawgs!), and graduating as a member of Phi Beta Kappa. Reid had four great loves in his life: his wife Pam, Gracie, police work, and Batman (not necessarily in that order). He knew from his childhood that he wanted to serve the community as a police officer, and maintained that dream throughout his life. He worked for 20 years as a deputy in Snohomish, and still holds academic records at the Washington State Police Academy. Reid served as a mentor and friend to many on the police force, as well as a hero to his only daughter, Grace. He could be seen by the neighbors every night leaving for his graveyard shift with the lights of his car flashing for Gracie to watch from the window before she went to bed. Reid was truly a rarity in how intelligent he was, but his family will always remember him for his sense of humor. No one in this world could make Gracie or Pam laugh as hard, and they may never again encounter a person with such an encouraging outlook in the darkest of life’s days. Few people understand the cosmic comedy of life like Reid did. Throughout the course of his illness during his last years, an innumerable quantity of nurses across the state were forced to listen to his hospital bed comedy set. Reid died in his sleep on September 3rd, 2017 in his home and is survived by Pam, Gracie, Jane, and (most importantly) his cat Nabatha Frye. Gracie will always remember the father who took her to the tulip fields every year and watched Dragon Ball Z with her every night. Reid will be greatly missed each and every day by his loved ones and the community he served, and his family would truly like to thank everyone who contributed to the life of the kindest, smartest, and funniest person they ever knew. A service will be held for Reid in January, the date to be announced later. Please express your thoughts and memories for the family at www.nicolesfuneralhome.com.

Reid Douglas Elliott was born in Everett, Washington on June 1st, 1961 to his parents Georgia and Verlin Elliott. He was raised, along with sister Jane Elliott, in Everett, where he attended and graduated as valedictorian from Everett High School.... View Obituary & Service Information

The family of Reid Douglas Elliott created this Life Tributes page to make it easy to share your memories.

Reid Douglas Elliott was born in Everett, Washington on June...