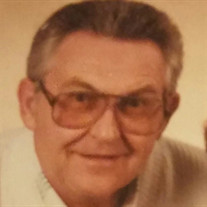 Monday, January 2, 2017, after a visit from his son Ken, Richard Raymond Hoyt, of 221 Maringo Road, Ephrata, Washington and currently, The Coolidge House of Ephrata, waited to say good-bye to his daughter, Pam ~ racing in from Colorado ~ and left this world quietly to be reunited with his wife, Yvonne, and all those friends and family members, who had left before him but were waiting for him! Born to Irene and Raymond Hoyt on January 17th, 1931 in Sedro-Woolley, Washington, Dick grew up the oldest of 4 children. In the hills and mountains of the Northwest, our father learned to love the outdoors! He later became a Wildlife Agent for the State of Washington enjoying long drives, sometimes stopping to take photos, admiring the world the Lord had made. Richard graduated from Sedro-Woolley High School in 1948 and after a year of trapping in the hills, enlisted in the Army. He served in Germany and Korea and was honorably discharged. Upon returning home, he married the love of his life, his Bride, Yvonne Marie Cossart-Rasmussen on June 22, 1952. Attending Grays Harbor College, the young couple had two children while living in Aberdeen. THEN, Dick moved his family across the state to attend "the greatest college known to man"....Washington State University! Another child, Ken, was born. While he attended school at the hallowed halls of WSU, Dad worked delivering milk, living in a basement apartment, entertaining fellow college friends because mom and dad had the only black and white TV in the neighborhood! He enjoyed working out and showing off his finger-tip push-ups! He graduated with a degree in Biology and Zoology and did his internship for the Idaho Dept. of Game. He worked for the Washington State Department of Wildlife in Monroe and in 1962 settled in Ephrata. He retired from the WA. St. Game Dept. in 1984. Richard had a passion for opportunities to participate in everything to serve his community. He loved Ephrata and the Columbia Basin. He enjoyed his job and all the peripheral benefits of being a game agent ~ which meant participating actively in the world of wildlife. He continued learning everything he could, sharing his knowledge and opinions with farmers, hunters, fishermen, other agents and to anyone else that would listen. It was truly a remarkable life for a man who was a quiet person by nature. But his enthusiasm for waking up each morning would not allow him to NOT be heard. He was a retired Game Warden, a Civil Service Member, a Public School and Private School Wildlife speaker, a visiting college teacher, a wholesale supplier of Owl Pellets, an antique bottle collector, an Ephrata United Methodist Church Member, a lifetime Ephrata Tiger, a Tiger football announcer, a Toastmaster, a Kiwanis member, a Cougar Club Member and WSU Alumni Scholarship Commitee member, AND a Lifetime Guardian of "Flora and Fauna" in the Columbia Basin...including all kinds of snakes! And, he was our Dad! Dick was unique in his life with his family, his job, his hobbies, his friendships and relationships, his interaction with youth and sports, his civil concerns, his relationships with his Creator, his love for animals and his enthusiasm for Nature. One passion did not overshadow the other. He was a passionate participant in life ~equally in task~ minute to minute, day to day, year to year with so much enjoyment, joy and humor! Some of his famous quotes would be: "Don't worry about that little bird that fell out of the nest, kids. It's just some other animal's Big Mac." Or, "There is only one reason to attend the U of W and that is when WSU would not accept your application." Or, "There are no bad snakes, just dumb people." Or, "Your Mother is and always will be ~ the prettiest woman in the room!" Richard R. Hoyt is preceded in death by his cherished wife of 61 years, Yvonne Marie Hoyt, his eldest son, Kevin Earl, his parents Ray "Doc" and Irene, and his brother Joe Hoyt. He is survived by his sisters: Judy Allen (husband, Herb) of Hamilton, Montana and Margie Snell (husband, Russ) of Sedro-Woolley, Washington. Daughter Pam Hungenberg (husband, Paul) of Greeley, Colorado and Ken Hoyt (wife, Diana) of Chelan, Washington. By Grandchildren: Jared (Chelsey), Jason (Cassie), Jordan (Elaine), Kathy (Brett), Jessa (Whitnee), Chad (Lexi), Alex (Allie), Dawson (Christina). And Great Grandchildren: Carter, Hayden, Westin, Kambria, Jackson, William, Kinzley, Camdyn, Adriann, and three more great-grand babies by summer! We will miss him as a Father, a friend, a colleague, a neighbor and a brother! We already miss his advice, his example, his work ethic, his stories, and his laugh! May the Lord give him peace and a patch of wildlife ground to care for! The "Celebration of Dick Hoyt's Life" will be March 11, 2017 at the Ephrata Methodist Church. It will begin at 11:00 AM, with a luncheon immediately following the service. As a tribute to our Dad, please wear your WSU T-shirts! If you would like to make a donation to your local Humane Society in Dick Hoyt's name ~that would be a wonderful tribute, too! Thank you! God Bless you, too :)

Monday, January 2, 2017, after a visit from his son Ken, Richard Raymond Hoyt, of 221 Maringo Road, Ephrata, Washington and currently, The Coolidge House of Ephrata, waited to say good-bye to his daughter, Pam ~ racing in from Colorado ~ and... View Obituary & Service Information

The family of Richard Raymond Hoyt created this Life Tributes page to make it easy to share your memories.