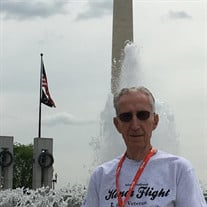 Obituary - Robert (Bob) Arbuckle Bob Arbuckle, of Ephrata, Washington, passed away on November 6, 2021 to be with his Heavenly Father. He was born on August 31, 1924 in Wenatchee, WA to John and Margaret Arbuckle. After graduating from Wilson Creek High School in 1941, he joined the Army and served for four years in World War II as a Sargeant with the Combat Engineers in the South Pacific. When he returned home from serving his country, he worked for the Washington State Department of Transportation. In 1951, Bob met the love of his life, Lorene Pfeifer, who he married in 1953. They moved to Ephrata, started a family in 1958, and were married for 68 years. He retired from the state after 35 years and then joined the Ephrata School District Maintenance Department for 20 years. Bob enjoyed family, projects around the home, and especially tending to his rose garden. He had a strong faith and was active in Our Savior's Lutheran Church in Ephrata. He always loved the time spent with his granddaughters, who affectionately called him "Sarge". Bob is survived by his wife Lorene, son Rob and wife Chris of Lynnwood, WA; daughter Robin of Mountlake Terrace, WA; granddaughters Taylor and Morgan Arbuckle, sister Isabel Jewell of Gilroy, CA; plus several nieces and nephews. He was preceded in death by his parents John and Margaret; brothers Hugh, David, and Jack; sisters Margaret and Mary. The family would like to thank Laurie Ahmann and her staff at Summerwood Alzheimers Care Facility in Moses Lake, and the doctors, nurses, and staff of Samaritan Hospital in Moses Lake during his final weeks. Please express your thoughts and memories for the family at www.nicolesfuneralhome.com. Arrangements are under the care of Nicoles Funeral Home of Ephrata.

Obituary - Robert (Bob) Arbuckle Bob Arbuckle, of Ephrata, Washington, passed away on November 6, 2021 to be with his Heavenly Father. He was born on August 31, 1924 in Wenatchee, WA to John and Margaret Arbuckle. After graduating from Wilson... View Obituary & Service Information

The family of Robert Hay Arbuckle created this Life Tributes page to make it easy to share your memories.