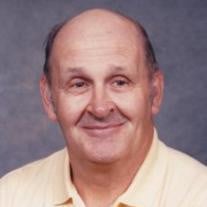 Robert Lamarr Carver,79, passed away Wednesday, May 23 2012 from a long and courageous battle with heart disease. He was born in Cashmere, WA to George and Alta Carver on November 30, 1932. He attended school in the Cashmere and Ephrata School Districts. Following high school education he enlisted in the U.S. Navy and served as a Gunner’s Mate on the USS Yorktown during the Korean Conflict. Following his Honorable Discharge, Robert married Shirley Elizabeth Russell in Bremerton on December 31, 1955. They had four children: Mike, Steve, Ken, and Lori. They resided in both Bremerton and Silverdale, WA. Bob’s (Robert) primary occupation was working at the Puget Sound Naval Shipyard as a Boiler maker. He was later transferred to Charleston, S.C. where he retired from the Charleston Naval Shipyard. In 1973 he married Annie Mae Ackerman and resided in North Charleston, South Carolina for the last thirty years. Following Anne Carver passing in 2012, Robert spent the remaining time in Moses Lake, WA. with family and friends. He enjoyed attending sporting events with his grandchildren, gardening, Western movies, music, and traveling. He was fondly referred to by his Grandchildren as Grasshopper and PA: Robert was also proud of his grandson Scott attending medical school in Milwaukee. He is preceded in death by his parents George and Alta Carver, brother Russell Carver, and his wife Annie Mae who he cared for until her death in January 2012. Robert is survived by Mike (Julie) of Salt Lake City, Utah, Steve of Moses Lake, WA., Ken (Sheri) of Seattle, WA., and Lori (Javier) of Moses Lake, WA., six grandchildren: Scott (Chelsey) of Milwaukee, Josh, Jordan, Jessie, Jamie, and Hayden, sister Bonnie Mathias, Brother Ray Carver, Cousin Delvin Loeffelbein, Uncle Butch, numerous cousins, nephews, nieces, and his long time good friend Karen Hightower. He will be missed but not forgotten by so many friends who had a deep love for him. Private Family Graveside Funeral Services will be held at Valley View Memorial Park on Saturday, May 26, 2012 under the direction of Nicoles Funeral Home of Ephrata, WA. Please express your thoughts and memories for the family and view the online tribute video at nicolesfuneralhome.com. In Lieu of flowers, the family has requested a donation be made to the American Heart Association 1710 Gilbreth Rd Burlingame, CA 94010-1795 or Special Olympics Attn: Web Gifts 1133 19th Street NW, 12th Floor Washington, DC 20036-3604

Robert Lamarr Carver,79, passed away Wednesday, May 23 2012 from a long and courageous battle with heart disease. He was born in Cashmere, WA to George and Alta Carver on November 30, 1932. He attended school in the Cashmere and Ephrata School... View Obituary & Service Information

The family of Robert LaMarr Carver created this Life Tributes page to make it easy to share your memories.