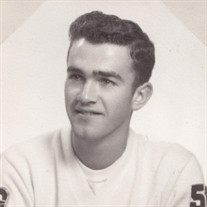 Lifetime resident, Robert Wayne Evans, 82, of Coulee City, passed away peacefully at home with his family by his side on Sunday, December 4, 2016. He was born on October 30, 1934 to Chester Brian Evans and Margaret Frances Willis Evans in Coulee City. A 1952 graduate of Coulee City High School, Bob attended two years of college at WSU, and then went to work for National Bank of Commerce in Almira. After a couple of years he transferred to Coulee City and left banking in 1975. He had been farming in his spare time, and he went to farming with his brother, Richard, full time. He retired in 2010. On November 12, 1955 Robert married the love of his life, Claudia Claire Jensen, at the Coulee City Presbyterian Church. The couple had three children, Dianne, Joan and Michael. Bob was a member of the Coulee City Sportsmen Club, a longtime member of Lakeview Golf Course and Sun Lakes Golf Course. He enjoyed trapshooting, golf and attending all sports activities at the school. Bob is survived by his two daughters Dianne and her husband, Don Roberts and Joan Balcom all of Coulee City; his son Michael and his wife, Tracy Evans of Olympia, Washington; along with his two brothers Harold Evans and his wife, Shyla and Richard Evans and his wife, Katie all of Coulee City; and his sister, Virginia Carey of Spokane. He is also survived by his eight grandchildren Jeremy Roberts and his wife, Christy of Coulee City; Lindsay and her husband, Marcus Crossler of Pullman; Kellen Roberts and his wife Allyson of Pullman; Brooke and her husband, Josh Pitts of Coulee City; Kolby Balcom of San Antonio, Texas; Michele Balcom of Austin, Texas; Carly and her husband Mario Luengo of Great Falls, Montana; and Craig Evans of Olympia; plus his ten great-grandchildren Abby, Parker, Brady and Peyton Roberts; Austin and Mariah Crossler; Carter and Brody Pitts; and Aiden and Evan Roberts. Bob was preceded in death by his wife of 56 years, Claudia, in 2012 and his parents Chet and Margaret. A memorial service will be held at 11 a.m. on Friday, December 16, 2016 at the Coulee City Presbyterian Church. In lieu of flowers, donations can be made to the Coulee City Senior Citizen Center. Please express your thoughts and memories for the family at www.nicolesfuneralhome.com.

Lifetime resident, Robert Wayne Evans, 82, of Coulee City, passed away peacefully at home with his family by his side on Sunday, December 4, 2016. He was born on October 30, 1934 to Chester Brian Evans and Margaret Frances Willis Evans in Coulee... View Obituary & Service Information

The family of Robert Wayne Evans created this Life Tributes page to make it easy to share your memories.