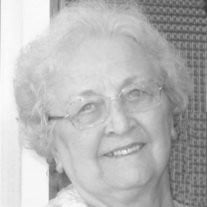 Rowana Thompson, 90, a 62-year resident of Ephrata, Washington, passed away Thursday, August 22, 2013 at Columbia Basin Hospital in Ephrata, after a brief illness. She was born in Mitchell, Indiana to Ida Mae and Henry McPherson on March 21, 1923, one of eight brothers and sisters. Rowana met Don when he was attending Indiana University in Bloomington, Indiana in the Army Specialized Training Program. They were married in New Orleans on April 4, 1945, the day Don graduated from Officer Candidate School. She had attended Business College in Bloomington and after working for an attorney in her first job she became the manager’s secretary of the Bloomington Employment Office. During that time Don was stationed at Camp Stoneman, California and Rowana was hired as secretary to the Chief of Personnel at the Army base. While Don attended Washington State University following the end of World War II, she worked in the Communication’s Office and later was secretary to the Dean of WSU School of Pharmacy. Don and Rowana were owners of Don’s Pharmacy in Ephrata for 33 years. Rowana was a stay-at-home mom and did the bookkeeping evenings after the pharmacy closed. Rowana is survived by her husband of 68 years, Don Thompson Sr.; two sons, Don (Diane) Thompson Jr. and Rodney Thompson; a daughter, Janice Thompson; grandsons Craig Thompson and Richard Thompson; great-grandson Aiden Thompson; two sisters, Kathryn Parks and Agatha Merry, both in Indiana; several nieces and nephews; and sister-in law, Gwen Galey of Boise, Idaho. She was preceded in death by her parents, three brothers, two sisters, and three grandchildren. We will miss her very much but take a great deal of comfort knowing she is at home with God. She leaves a loving family and many friends. Funeral Mass will be held at 11 a.m. on Friday, Sept. 6, 2013, at St. Rose of Lima Catholic Church, 323 D St. SW in Ephrata. Please leave a memory for the family or sign their online guestbook at www.nicolesfuneralhome. com. Arrangements are under the direction of Nicoles Funeral Home, Ephrata, Wash.

Rowana Thompson, 90, a 62-year resident of Ephrata, Washington, passed away Thursday, August 22, 2013 at Columbia Basin Hospital in Ephrata, after a brief illness. She was born in Mitchell, Indiana to Ida Mae and Henry McPherson on March... View Obituary & Service Information

The family of Rowana Maxine Thompson created this Life Tributes page to make it easy to share your memories.