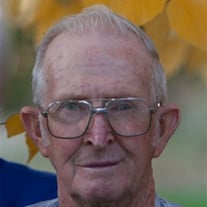 Russell E. Wentworth passed away in Moses Lake, WA on January 29, 2020 at the age of 94. Russ was a WWII veteran and served honorably with the 90th Infantry Division, 712th Division – Tank Battalion, under General George S. Patton. Russ was born in Maroa, IL on December 18, 1925 to Floyd and Otta Wentworth. In 1944, Russ graduated from Maroa High School and immediately joined the Army. By January 1, 1945 he was aboard the Queen Mary, on the way to Glascow, Scotland where he traveled by walking “halfway to France” and the traveling by railcar, before joining the Tank Battalion. During a skirmish near Vservby, Czechslovakia on May 1, 1945, Russ was injured and was awarded the Purple Heart. He continued to serve and was honorably discharged on May 20, 1946. Russ continued with the Reserves for about 10 more years, before the requirements of farm and family life prevented it. Not long after returning to Illinois, his family decided to move to Shoshone, Idaho where they farmed and raised dairy cows. It was in Idaho where Russ met and married the love of his life, Thelma Thompson. During this time, Russ had also applied for the veterans drawing and through that, purchased a parcel of land South of Ephrata, WA cementing his place as a ‘pioneer’ of the area. Over the next several years, they added 3 sons and a daughter to their family, while clearing sagebrush and cheatgrass to make the land farmable. He also (with the help of a neighbor) built the house that he lived in until his final day. Russ made quite an impact within the Columbia Basin community, receiving the Good Neighbor Award by the Ephrata Chamber of Commerce, Conservation Farmer of the Year by the Soil & Water Conservation Service and Hay King of the County by Mid-Columbia Hay Growers Association. Russ served 19 years as a director of the Quincy Irrigation District. Russ was also a member of the VFW and was a long-time member of the United Methodist Church, White Trail Grange and Columbia Basin Gem & Mineral. His passion and hobby for gems, minerals and fossils was immense. It was not unusual to find all the kids packed in the back of the pickup, slowly making their way up hillsides, searching for Petrified Wood and Ellensburg Blue. By the mid 1970’s Russ and Thelma were spending part of the winter in Quartzsite, AZ, selling rock slices that Russ had cut and jewelry that he had made. It was as important for them to teach as it was to sell. They would spend hours talking about gems and minerals and always had rocks on hand to give to little kids. Russ was president of the local rock hound chapter for many years and served as a volunteer at the Lapidary booth at the Grant County Fair. As they got older, they started spending more and more of each winter in AZ, before stopping in 2016, when the trek and lifting the boxes of rocks became too difficult. In 2016, Russ was accepted into the Sons of the American Revolution, and was a member of the Mid-Columbia SAR Chapter. He looked forward to the meetings and representing the organization whenever he could. In late 2017, Russ lost the love of his life, Thelma, after almost 63 years of marriage. Russ is survived by his sons, Russ (Judy) Wentworth – Selah, WA, Les (Laraine) Wentworth – Ephrata, WA, Dale (Kathy) Wentworth -Ephrata, WA; his daughter, Denise (Jim) Taylor – North Pole, AK; grandsons John Wentworth – Tacoma, WA, Nick Taylor – North Pole, AK, Scott Taylor – North Pole, AK and Chris (Tina) Campbell of Moses Lake, WA; granddaughters Kelley (Arlen Pritchard) Wentworth – Seattle, WA, Jennifer Wentworth, Snoqualamie Pass – WA, Emily (Chris Nelson) Wentworth – Post Falls, ID, Abby Taylor – North Pole, AK and Melanie (Chad) Strevy – Moses Lake; numerous great grandchildren, nieces and nephews; and his brothers Kenneth and Curtis Wentworth. Russ is preceded in death by his wife, Thelma; his brother Robert Wentworth, his sister Viola Lamont and his parents Floyd and Otta Wentworth. A memorial service will be held at 3PM, on February 15, 2020 at United Methodist Church, 117 C St. NW, Ephrata, WA 98823. All are welcome to attend and celebrate Russ’ life. Flowers or donations may be sent to that address. Please express your thoughts and memories for the family at www.nicolesfuneralhome.com. Arrangements are under the care of Nicoles Funeral Home of Ephrata, WA.

The family of Russell Eugene Wentworth created this Life Tributes page to make it easy to share your memories.