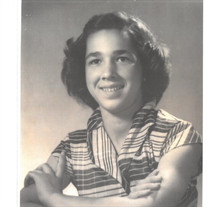 Sandra Evelyn Frazier was born on September 18th, 1936 in Fort Ripley, Minnesota. This was during a time of the Great Depression, where nothing was taken for granted. That was something she carried with her all of her life. If Sandy came across something, she would find it a purpose or a multipurpose. She'd say, "Let's not be wasteful." Sandy was blessed with a good-sized family. She had three brothers and three sisters. She was one of seven born of Lawrence & Evelina Foix. She is survived by her three sisters, Lorraine Boaz, Delores Reck, Gwendolyn Belcher, her three children, daughters Diana Lamar, (Dan Lamar) Cynthia Wharton and son Allen Dixon. Along with several Grand & Great Grandchildren and many she adopted. Sandy is preceded in death on earth, by her loving parents, her three brothers, Leroy, Donald and Harold Foix and her great grandson Bryce Prince Adame. While in school, Sandy was a part of the marching band and an assistant teacher for girl athletes. Before Sandra's near tragic accident around 1986, leaving her disabled, she spent most of her time in employment with Treetop as a laborer. Sandy also had experience in cooking, nursing, sewing and teaching youth Bible studies. One word to describe Sandy would be spunky. She is remembered by many things. You would see Sandy taking rides on her electric chair accompanied by her well-known companion, Ginger, AKA, Gigi. Sandy enjoyed taking Ginger on daily walks while taking her son lunch, as long as the weather permitted. One way or another Allen got his lunch. Before Sandy's hands gave in, she was also known for all the beautiful quilts she made. She made sure that everyone had one. If you were lucky, you may have gotten slipped an extra one or few. Sshhh. Of late, you could find yourself enjoying a puzzle together with a soft comforting conversation. Sandy hobbied herself in beautiful beaded necklaces. Everywhere Sandy went, traces of glass beads were spread along with the message of Christ. Most of all, God was her number one. Sandy was a woman of strong devoted faith without fail. The Lord's light shined bright within her. She shared the Lord's love and glory with everyone and with everything she did. She'd say, " Can I pray for you," or "Can we hold hands and pray together?" Sandy's entire life was devoted to Jesus. Some of the most memorable times was that trip with her father Lawrence and her children, around the United States. From California to Texas, then Minnesota to Washington. She seemed so happy on that trip, stopping to see family along the journey. There was a time she gave swimming lessons. Sandy got on her belly on a rock in shallow water, while making air motions. One could not forget that. Another time was her letting out a very distinct shriek while camping, as a grizzly bear walked right over the top of her tent knocking it down. Oh boy did she scream. This one time the bathtub ran over and trickled down into the basement. After standing under the drops for what seemed forever, you bet that was never an issue again. Sandra was a real treat. She loved the Lord with all her soul and she loved all of you. Her one hope for you is that you accept the Lord as your Savior so that she can see you again in eternity forever. God bless.

Sandra Evelyn Frazier was born on September 18th, 1936 in Fort Ripley, Minnesota. This was during a time of the Great Depression, where nothing was taken for granted. That was something she carried with her all of her life. If Sandy came across... View Obituary & Service Information

The family of Sandra Evelyn Frazier created this Life Tributes page to make it easy to share your memories.