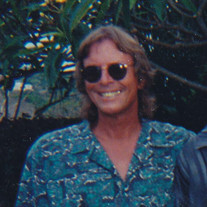 Johnny “Scott” Williams, joined many family and friends in eternity on July 7, 2016. Survived by his children Erick and Kara Williams. Sisters; Nicci Warren, Spokane Valley, Cindi Zayas, Spokane, and Carolyn Corral, Tacoma, seven grandchildren, and many nieces and nephews. He is also survived by Maternal Aunts Leatha Grubb, Rosie Baltas, and Uncle; Stan Williams. A Paternal Aunt; Pat Spence, and two cousins; Craig and Steve Isitt. Preceded in death by his parents; Johnny and Carol Williams, maternal grandparents; Erick and Maude Tetzloff and paternal grandparents; Floyd and Ada Williams and special friend Kelly McBride. Scott's elementary school years had him riding bikes in the Peninsula and Knolls Vista School areas. He was a Moses Lake High School graduate, class of 1970. Scott was a talented athlete involved in football, wrestling, and baseball. As the quarterback on the FJH football team he never scored a goal but his coach encouraged him to never give up. His love for sports continued on from being an excellent 3rd baseman to watching ESPN. A loyal LA/St. Louis/LA Ram fan kept him high and low every season. The Super Bowl win in 1999 was a huge high that kept him pumped all summer and into the next season. Unfortunately that was the worst season for the Rams in NFL history! And even though he burned all of his Rams gear after that he rebounded and remained a loyal fan to the bitter end. He worked for Brotherton Seed Company, a member of the Carpenter’s Local Union out of Pasco, and in his younger years worked with Matthew Steel Buildings (Legacy Construction) here in Moses Lake. In 1973 while “cruising the gut” he ran into Sherri Powell at the “Unemployment Office” local hang out. They married on the hottest day of July in 1976 (no air conditioning in the church or reception hall) so they moved the reception to the “canal”! That was the beginning of their over 40 year relationship. In 1979 his son, Erick Scott Williams was born and in 1984 daughter, Kara Ann Williams was born. They lived on Highland Drive in Black’s Addition for 30 years. He loved animals. The family always had at least one dog or cat to take care of. He was surprised when Sherri brought home turkeys for him to raise for Thanksgiving dinner. The turkeys sadly were attacked and killed,, but he admitted to getting to like them. He had a green thumb like his Grampa Tetzloff and enjoyed gardening. He spent many years taking Erick and B.J. Dirk (Erick’s best friend) fishing, hunting, and camping. His favorite band was The Rolling Stones. One of his best memories was taking the entire family to the Rolling Stones Concert in Seattle in 1981. He loved the Oregon Coast, the family would travel there on annual vacations while heading to California, to visit Sherri’s family. The vacation also included pit¬stops to visit his family in Milton Freewater, Oregon and the Williams Family homestead in Umapine, Oregon. He adored his seven grandchildren. They range in ages 2¬-14. Each one had a special place in his heart. He enjoyed watching them grow and taking them to the dock to learn how to fish. Scott was a humble, quiet man who knew the difference between a relationship with Christ and religion. He didn’t practice religion. The hymn “What a Friend We Have In Jesus” says it all... What a friend we have in Jesus All our sins and griefs to bear! What a privilege to carry Everything to God in prayer! O what peace we often forfeit O what needless pain we bear, All because we do not carry Everything to God in prayer. Have we trials and temptations? Is there trouble anywhere? We should never be discouraged; Take it to the Lord in prayer. Can we find a friend so faithful Who will all our sorrows share? Jesus knows our every weakness; Take it to the Lord in prayer. That is what he practiced. As a child he heard Sunday School stories in church and at home. As an adult hIs Christian faith grew through sermons and life lessons from Light and Life Fellowship Pastor Lowell Weller and Pastor Havens and Lake City Four Square Pastor Dave Chandler. Close friend Bob Bozman was a faithful prayer warrior. Not that I have already obtained all this, or have already been made perfect. But I press on to take hold of that for which Christ Jesus took hold of me. Brother, I do not consider myself yet to have taken hold of it. But one thing I do; Forgetting what is behind and straining toward what is ahead. I press on toward the goal to win the prize for which God has called me heavenward in Christ Jesus. Philippians 3:12-14. Sin separates us from God. "But God so loved the world that he gave his only son" and Scott knew that by faith the only way to God the Father and eternity was through His Son, Jesus Christ. Therefore, he chose to accept Christ as his friend and now his citizenship is in heaven. His journey with us on earth may be over but the memories we’ve made will remain in our hearts as we long for the day “beyond the sunset” where we’ll see each other again. The family will host a Celebration of Life at a later date. For now think of Scott whenever you hear a Rolling Stones song and amp it up!

The family of Scott Williams created this Life Tributes page to make it easy to share your memories.

Johnny “Scott” Williams, joined many family and friends in eternity...