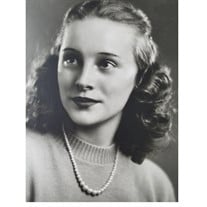 Shirley Lou Morris died December 31, 2017 at the age of 87 in the care of the wonderful staff of the Columbia Basin Hospital in Ephrata, Washington. She was born January 14, 1930 in Everett, WA to parents Arvid and Margret Norberg. Shirley, with her younger sister Mary, spent their childhood in Marysville, WA. on a dairy farm with many cousins to play with. She graduated from Marysville High School with honors in 1948. She also attended Washington State College. On returning home she married John Owen Morris, also of Marysville, on March 25, 1950. The following year in the spring of 1951 John, Shirley and infant son Stephen made a life altering move to Ephrata, WA. John and Shirley worked hard to create a farm from sagebrush in Block 71 of the Columbia Basin Irrigation Project and received some of the first water delivered in 1952. The next year Shirley gave birth to their second son, Paul, who was delivered in the first Ephrata Hospital. While most farmers at that time were dairymen besides growing crops, John and Shirley went into the egg business. They had over 300 laying hens. Not only did Shirley care for the chickens, she sold the eggs in Ephrata. In 1957 son number three, John, was born. While the farm operation expanded to raising potatoes, Morris Farms obtained one of the first potato contracts from Lamb Weston. When her husband John went blind due to diabetes in 1965, Shirley courageously supported and cared for him. They continued to farm despite John’s medical condition. They sold real estate together for several years. While farming and raising three boys, Shirley still found time for her community. She and her family were active members of the United Methodist Church of Ephrata. She did everything from teaching Sunday school to helping with funerals. Shirley and John were part of the congregation that built the church we know today. Shirley was a founding member and active in the Block 71 Ladies Club. She was also very involved in the Republican Party and became a Grant County Precinct Committee Chairman. While chairman, Shirley traveled to Washington D.C. where she met and was photographed with Vice President George H. Bush! This was a true Kodak moment for Shirley. Shirley served on the Columbia Basin Hospital Board for 26 years. As a Columbia Basin Hospital Commissioner, she took part in the groundbreaking of the hospital’s new north wing. She was also a member of the Hospital Auxiliary. During this busy life, Shirley still found time to knit. She was known for her lovely sweaters created from beautiful yarns and became a master of her craft. Her creations could be seen at the Grant County Fair displayed with their blue ribbons. After her husband John’s death in 1981, Shirley became a world traveler with her friend Norma Flint. They journeyed to Argentina, Mexico, Belize, Costa Rica and also enjoyed a couple of cruises. After blazing her way through this life, Shirley will be missed by family and friends. Shirley was preceded in death by her parents, her husband John Owen Morris and her daughter-in-law Linda Lee Morris. She is survived by her sister Mary Brocklebank her three sons Steve (Cheryl) of Wenatchee, Paul (Marcy) of Ephrata, and John (fiancé Lonna) of Ephrata, grandchildren Stephanie, Sarah, Trevor and Brenna; greatgrandchildren Bailee, Matthew, Sienna and Penelope. The memorial service will be Wednesday, January 24 11:00 am at the United Methodist Church of Ephrata, 117 C Street NW. Memorials may be made to a charity of choice in Shirley’s name.

Shirley Lou Morris died December 31, 2017 at the age of 87 in the care of the wonderful staff of the Columbia Basin Hospital in Ephrata, Washington. She was born January 14, 1930 in Everett, WA to parents Arvid and Margret Norberg. Shirley,... View Obituary & Service Information

The family of Shirley Lou Morris created this Life Tributes page to make it easy to share your memories.