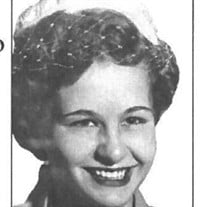 Shirley Sieverkropp, 84, returned to her Heavenly home on Friday, November 19, 2021, surrounded by her family who loved her so much. Her devotion to family and firm belief in God supported her during struggles and ultimately gave her peace. Shirley Ann (Radach) Sieverkropp was born on February 17, 1937 in Leavenworth, Washington to Josephine and Art Radach. She along with her siblings, Ray, Kenny, and Barbara moved to the Ephrata, Washington area in 1946 when her mother married John Preston. Shirley lived in Ephrata until her death. In 1955, she graduated from Ephrata High School. While in high school she went on a blind date and met the love of her life, Robert Sieverkropp. The two were married a few days after she graduated high school and the two went on to have a loving 66-year marriage. After marriage they made their home on a wheat and cattle ranch west of Ephrata. Early in Shirley and Robert’s marriage, Shirley was baptized into Christ. They made Our Savior’s Lutheran Church in Ephrata their church home where she attended regularly up until the time that she was no longer physically able. Shirley and Robert welcomed their first child Timothy in 1958, followed by Allen, and Joan. Shirley loved being a mom and she took much pride in her children. In their youth she loved attending their sporting events and cheering them on from the bleachers. The foundation of love that was built during their childhood only grew as they became adults. Up until her passing she enjoyed a daily phone call or a cup of coffee with each of her children. Nine grandchildren and 13 great grandchildren had the privilege of calling her Grandma. Shirley’s love language was gift giving and each Christmas and birthday she loved to shower each one of her grandchildren with love. It brought her so much joy to host Christmas Eve and watch the excitement of her grandchildren unwrapping their gifts. Of the things she said she’d miss, seeing her great grandchildren grow up was at the top of her list. In retirement, she and Robert enjoyed their winters in Las Vegas and Arizona with her sister Barbara. Their summers were spent in Sekiu, Washington salmon fishing on their boat. Fishing brought out Shirley’s competitive nature and up until her last days she still talked about the time when she had a “whopper” on her line and Robert didn’t bring up his downrigger causing her line to be cut and her fish to be lost. She said she didn’t talk to him for days. “Beezley Stor-All” became a telephone greeting synonymous with Shirley. Many family dinners, outings, or activities were planned around or cut short for her to go meet a new customer. When she became unable to get around, she and Robert became faithful fans of Gonzaga basketball and the two enjoyed watching all Zag’s games together from the comfort of their chairs that sat next to each other. Shirley was great at many things, but perhaps most importantly she was best at how she expressed her unconditional love. The wisdom that she shared made you want to live the best life you could. She will be missed immensely by her family, friends, and all who knew her. Shirley is survived by her husband Robert; children and spouses Timothy (Lori) Sieverkropp, Allen (Karen) Sieverkropp, and Joan Sieverkropp; grandchildren and spouses, Aimee (Matt), Betsie (Nicholas), Emilee (Wes), Nathan (Ginny), Aaron (Lindsay), Chad (Sable), Kyle, Alex (Molly), and Chase (Madison); along with 13 great grandchildren, Mason, Isabella, Jack, Reid, Noah, Hannah, Micah, Iva, Julia, Ruby, Axel, Millie, and Lila. She is also survived by many family and friends. She was preceded in death by her parents, stepfather, brothers, and her best friend and sister, Barbara Adams. The family would like to thank her caregivers who became more than caregivers, Letty, Vicky, Jacky, Natalie, Tonia, and Kellie. Thank you for loving her, treating her with the utmost dignity, honor, respect, and most importantly for being her friend. Services for Shirley will be held Saturday, November 27, 2021 at Our Savior’s Lutheran Church, 471 Nat Washington Way, Ephrata, Wash. at 11 a.m. If desired, friends and family can make memorial contributions to Our Savior’s Lutheran Church – Seminary. Please express your thoughts and memories for the family at www.nicolesfuneralhome.com. Arrangements are under the care of Nicoles Funeral Home of Ephrata, Was

Shirley Sieverkropp, 84, returned to her Heavenly home on Friday, November 19, 2021, surrounded by her family who loved her so much. Her devotion to family and firm belief in God supported her during struggles and ultimately gave her peace.... View Obituary & Service Information

The family of Shirley Sieverkropp created this Life Tributes page to make it easy to share your memories.

Shirley Sieverkropp, 84, returned to her Heavenly home on Friday,...