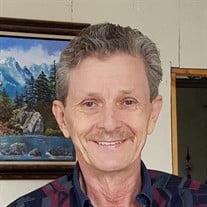 STEPHEN CARL NYQUIST (Age 71) Stephen (Steve) died unexpectedly at his home in Soap Lake, Washington August 15, 2017. He lived life the way he chose right up to his last breath. He loved people, pool, and art. Steve was born March 12, 1946 in Oregon City, Oregon to Richard Nyquist and Julia Annetta (Loy) Nyquist. His Mother and stepfather moved around causing him to attend 11 high schools before graduation from Lincoln H.S. in Portland, Oregon in 1964. He joined the U.S. Navy late 1964 as a Communications Yeoman. The Navy took him to Japan and Guam serving on the USS Comstock. He was honorably discharged in 1968 and married in Kalispell, Montana then moved to Oregon where Eric Scott Nyquist, his only child, was born. Steve worked at Safeway. He moved to Soap Lake, Washington about 1993. He attended art classes with his Mother, Julia Schopp, and discovered he enjoyed painting. He was a Seahawks, Mariners, and Oregon Ducks fan and loved playing pool; participating in pool tournaments and helping others to better their pool skills in the Ephrata/Soap Lake area. Before retiring after 7 years with WalMart in 2008, he painted a huge mural in the employee lounge for the employees to enjoy then and now. A bout with throat cancer and a continuing issue with Juvenile Diabetes slowed him on occasion, but he continued his love of people and pool as often as possible. His loving personality, smiles, jokes, and a pocket of candy was always welcome and will be missed. Survivors include his son, Eric S. Nyquist (Kiatcha) and their four children: Derik and Kaylyn in Fairbanks, Alaska; Katrine Hale (Elisha) and Nathan in Indianapolis, Indiana. Steve is also survived by his siblings: Kenneth Nyquist (Sharon), Marjorie Mero (Gordon), and Elden Nyquist (Adele). Pat Jorgensen and Teresa Malley are half sisters in Canada. He was Uncle Steve to Duane Mero (Tiffany) and Sheryl Florance (Doug); Lynden and Nancy Nyquist, and Anne Beals (Brad). A private memorial will be later. Sharing memories on Facebook is appreciated.

The family of Stephen Carl Nyquist created this Life Tributes page to make it easy to share your memories.