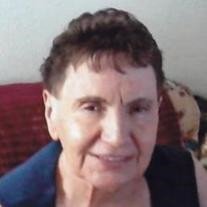 Sue Peterson Barbara “Sue” Peterson, 70, of Ephrata went home to be with her Lord and Savior on July 3rd, 2012 at Central Washington Hospital in Wenatchee. Sue was born January 26th, 1942 to Rufus and Lola Bowman in Marianna, Arkansas. She was of Baptist faith and in her younger years was a member of a family trio and a southern gospel music quartet. She lived in Arkansas until 1966, and then moved to California with husband Jerry Steed along with their children Mark, Susan and Gerrie Lynn. Sue and Jerry later parted. She lived in California until she married Jim Black, they moved to Washington in 1972. They also parted. She was employed by Bekins Moving and Storage for many years and Satelite TV by George in Moses Lake as a bookkeeper before she retired. In 1989 she married long time friend Russell Peterson. They enjoyed spending time at the Peterson family ranch in Winthrop, made trips to Minnesota and Canada, and enjoyed their life together for 22 years until Russell passed in February 2011. She was also preceded in death by her parents and brother James Bowman. She is survived by her children: Mark Steed and wife Laurie of Tracy CA., Susan Manning and husband Steve of West Richland, WA., Gerrie Harmon and husband Paul of Ephrata, WA. Russell’s children: Don Peterson and wife Eileen of Seattle, WA., Donna Rowe and husband Gene of Woodinville, WA., grandchildren: Kristen Steed, Scott Johnson, Anthony Manning, Joey Manning, Haley Manning, Kelsey Manning, Michael Manning, Sarah Harmon, Brian Harmon, Kate Peterson, and Lacey Peterson, great-grandchildren: Graciela Manning, Keaton Manning, Cameron Plaisted, and Trinity Nations. She also leaves behind her big brothers Ray Bowman and Bobby Bowman and wife Ruth of Greenbrier, Arkansas along with many nieces and nephews, and a wonderful longtime friend Donna McKim of Ephrata, WA. Sue was a caring and compassionate woman who loved her family and friends deeply. We will miss her and look forward to seeing her again someday “What a Day That Will Be”. Services to Celebrate Sue’s life will be held on Tuesday, July 10th, 2012 with a viewing from 12-1:00 p.m. Services to begin at 1:00 p.m. at the Ephrata First Baptist Church, 327 C St SW, Ephrata, WA. Her brother Bobby Bowman along with Pastor Gordy Whipps will be officiating. Graveside service at the Ephrata Cemetery. Reception to follow in Ephrata First Baptist Church fellowship hall. Memorial may be made to: Bowman Evangelistic Ministries.

Sue Peterson Barbara “Sue” Peterson, 70, of Ephrata went home to be with her Lord and Savior on July 3rd, 2012 at Central Washington Hospital in Wenatchee. Sue was born January 26th, 1942 to Rufus and Lola Bowman in Marianna, Arkansas. She... View Obituary & Service Information

The family of Sue Peterson created this Life Tributes page to make it easy to share your memories.