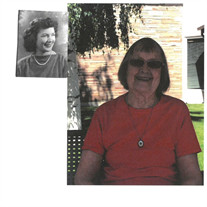 Thelma Ruth Watson, a resident of Garden Oasis Assisted Living in Ephrata, Washington, entered the presence of her Savior and Friend, Jesus Christ, on Tuesday, October 12, 2021 at Columbia Basin Hospital. She was 91. Ruthie was born on December 26, 1929 in Elma, Washington to Sam and Helen DeYoung and treasured her upbringing on a farm. She followed in her parents’ footsteps by marrying well on December 17, 1949 to Elwyn Seymour (Doc) Watson, a fellow student of Seattle Pacific College, at her home church in Elma, Washington. Doc and Ruth’s 67-year marriage exemplified shared values, infectious joy, and a genuine love for people. Although a full-time home-maker, Ruthie took occasional part-time jobs to help with the family’s finances. One such position was at an auto auction where she drove everything from semi-trucks to a Lamborghini (which she dubbed, “just another car”). She and Doc excelled in parenting, gifting their children with assurances of love, senses of humor, the joys of family recreation, and good work ethics. Ruthie’s kind heart and actions have transformed entire neighborhoods, schools, churches, and communities. Nearly every continent has received one or more boxes of her bright, well-made quilts for distribution to the poor; she most recently partnered with the local Samaritan’s Purse Christmas Child Shoebox volunteers. Ruth was preceded in death by her husband, Doc, her sister Jeannette Mowe, and brother Robbie DeYoung, each who had given their hearts to Christ and have no doubt been awaiting her arrival. She is survived by a son, Mike Watson of Kennewick, daughters Jean Patterson and June Strickler of Ephrata, honorary daughter Marcia Dungan of Ephrata, in addition to grandchildren and great-grandchildren. The family extends its praise to the tremendous staff at Garden Oasis Assisted Living and team of caring medical providers at Columbia Basin Hospital.

Thelma Ruth Watson, a resident of Garden Oasis Assisted Living in Ephrata, Washington, entered the presence of her Savior and Friend, Jesus Christ, on Tuesday, October 12, 2021 at Columbia Basin Hospital. She was 91. Ruthie was born on December... View Obituary & Service Information

The family of Thelma Ruth Watson created this Life Tributes page to make it easy to share your memories.