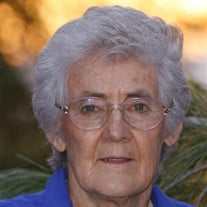 Thelma Lorraine (Thompson) Wentworth, of Ephrata, WA passed away on December 27, 2017 with her husband of 62 years, Russ Wentworth, by her side. Thelma is survived by her husband Russ of Ephrata, WA; her sons Russ (Judy)Wentworth of Selah, WA; Les (Laraine) Wentworth of Ephrata, WA; Dale (Kathy) Wentworth of Ephrata, WA; her daughter Denise (Jim) Taylor of North Pole, AK, her grandsons John (Adrienne) Wentworth of Tacoma, WA; Nick Taylor of North Pole, AK; Scott Taylor of North Pole, AK; Chris (Tina) Campbell of Moses Lake, WA; her granddaughters Kelley Wentworth (Arlen Pritchard) of Seattle, WA; Jennifer Wentworth of Snoqualamie Pass, WA; Emily Wentworth (Chris Nelson) of Post Falls, ID; Abby Taylor of North Pole, AK; Melanie (Chad) Strevy of Moses Lake, WA; 7 great-grandchildren and dozens of nieces and nephews. Thelma was born on April 22, 1934 in King Hill, ID to William and Florence Thompson. She graduated from high school in Glens Ferry, ID and then continued her education, graduating as a Graduate Nurse from St Alphonsus Hospital School of Nursing in Boise, ID. Thelma met Russ while still in nursing school. They were married in Elko, NV in 1955, but kept it a secret until after her graduation, since she would have been kicked out of school had word got out that she was married. Over the next 5 years, the couple had 4 children, as they moved from Idaho to Ephrata, WA and started their married and farming life together. Thelma’s nursing career was put on indefinite hold as they pursued farming full time. When not on a tractor, Thelma’s hobbies included oil painting, quilting, watercolor painting and fabric dyeing. She lived in a world filled with color and was insistent that anyone she met lived there as well. She created beauty with every brush stroke and every stitch. Her generosity towards others was tremendous as evidenced by the paintings, quilts, wall hangings and clothing that adorn homes and people throughout the world. She leaves a legacy in every color of the rainbow. She was active in White Trail Grange, 4-H, Girl Scouts, Grant County Fair, Methodist Church, Columbia Basin Gem & Mineral, and many more. Her knowledge of gems and minerals, especially fossils, was incredible and she always took time to impart that knowledge to anyone who showed an interest, especially children. She was known as the ‘Dinosaur Lady’ and taught programs in classrooms across the country. Thelma is preceded in death by her parents, William and Florence Thompson; her brothers Herb, Robert and David Thompson; and her sister Lillian Tutt. A reception is scheduled for January 13, 2018, at United Methodist Church Fellowship Hall, 117 C Street NW in Ephrata, WA, at 11:00 AM. All are welcome to attend and celebrate Thelma’s life. We ask that if she made you a quilt/wall hanging/shirt or painting, please bring to the reception so that we fill the Hall with color for her. Arrangements are under the care of Nicoles Funeral Home of Ephrata, Wa.

Thelma Lorraine (Thompson) Wentworth, of Ephrata, WA passed away on December 27, 2017 with her husband of 62 years, Russ Wentworth, by her side. Thelma is survived by her husband Russ of Ephrata, WA; her sons Russ (Judy)Wentworth of Selah, WA;... View Obituary & Service Information

The family of Thelma Lorraine Wentworth created this Life Tributes page to make it easy to share your memories.