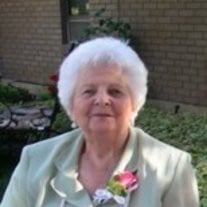 Vera Adams (1923-2013) Vera Watson Jepsen Adams, a long-time resident of Ephrata, died peacefully February 5, 2013 while a resident of the Columbia Basin Hospital Nursing Home, from causes incident to her age of eighty-nine. Vera was born December 16, 1923, at Mink Creek, Idaho, to Hyrum Wilford Jepsen and Agnus Watson Jepsen. She was the fifth of ten children, Herman, Phyllis, Madoline, Vern, Vera, Donald, James, Ruth, Arlene, and Hyrum (Bud) Jr. She shared the title of twin with her brother Vern. Vera married Paul Vernon Adams on June 4, 1943 at Logan, Utah, in the Logan Utah Temple of the Church of Jesus Christ of Latter-day Saints. They made their home in Cleveland, Idaho after Paul finished his service in the United States Navy. They are the parents of six children, Ken (Darlene) Adams of Ephrata, Carol (Dennis) Whitney of Castle Rock, WA, Pauline (Jim) Sainsbury of Post Falls, Idaho, Roger (Nadine) Adams of Ephrata, Julie (Randy) Gray of Gilbert, Arizona, and Jay (Marie) Adams also of Ephrata. Vera was preceded in death by her husband, Paul, both of her parents, four brothers, three sisters, one grandson Erik Finlayson, and three great grandchildren Adam Finlayson, Mara Adams, and Liam Adams. Surviving Vera are two siblings, Phyllis Stenek of Salt Lake City, Utah, and Hyrum (Bud) Jepsen of Preston, Idaho, along with all of her six children, twenty-seven grandchildren, and fifty-eight great grandchildren. Paul and Vera farmed in Southeast Idaho at Cleveland for seventeen years, until October 1959, when they moved the family to Ephrata, Washington. They moved the family into a newly built basement home on Unit 218 of Block 89, having cleared the property of sagebrush, coyotes, and bull snakes. Fighting the wind, sand, and hot summer days, together they farmed and established Willow Drive Nursery which remains in the family today. In 1977 Paul and Vera established Adams Rootstock Nursery in Toledo, Washington and continued to live and work there until their retirement and relocation to Ephrata in 1986. Paul and Vera lived in their home in Ephrata until his death on May 5, 1995. During this time they served a mission to Adam-Ondi-Ahman in Northwest Missouri. She remained in the family home until circumstances forced her to move with her six children, rotating every few months. Her final three years were spent in the Garden Oasis Assisted Living Center and finally in the Columbia Basin Hospital Nursing Home. The family is very thankful for the kind and compassionate care she received by her Doctors, Nurses and Staff at the hospital. She will miss her friends there, Lois, Grace, and Treiba who she regularly ate with. Our thanks go to all of her friends and associates over the last sixty years in Ephrata. Funeral services will be held at the Ephrata LDS chapel on East Division, at 1:00pm, Saturday, February 9, with burial to follow at the Ephrata City Cemetery. Viewing will be Friday, February 8 at the Nichols Funeral Home from 6:00pm to 8:00pm.

The family of Vera Jepsen Adams created this Life Tributes page to make it easy to share your memories.