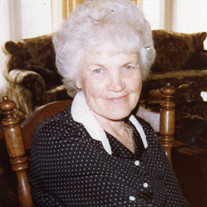 Our beloved mother, Verna Marie Slough, was taken ill on Mother's Day, May 10, 2015 and soon passed away June 1, 2015 at Central Washington Hospital in Wenatchee, eight days before her 94th birthday. She was born June 9, 1921 in Hillsboro, North Dakota to Anton and Signe Solberg, and was raised with eight sisters and brothers at the Norway Lutheran Church of Hillsboro. She was educated at public school and the state teacher college, 1941. She retired after working a long time at the Grant County Auditor's office, Bob's Auto Mart and Les Parr Real Estate. Moving to town in 1951 Bob and Verna Slough were always in the car business --finally in their own car business--Bob's Auto Mart. Mom sent students off to school for 34 years and graduated all five of her kids as Ephrata Tigers! In addition to their family and church, their favorite thing in life was the antique car club founded by Bob and his close friend Joe Malaspino in the early 60s. Mom belonged to Eastern Star (Masons) and was often seen playing bingo or pinochle -- she had many friends. She believed that community service was important as well, helping out at the voting polls every year as well as Ephrata Food Bank. She was a true christian. She was preceded in death by her husband, R.E. "Bob" Slough in 1993. She is survived by her five children -- Judy Roscoe, Tacoma, Wash., Bobbie Cargil, Cody, Wyoming, Fredrick Slough, Soap Lake, Kenneth Slough, Port Townsend, Jeffrey Slough, Wenatchee, and their spouses; nine grandchildren; and eight great-grandchildren. Services will be held at the Slough's family church, Holy Trinity Lutheran Church, 1012 C Street SW in Ephrata on Saturday, June 27, 2015 at 1 p.m. with a reception to follow. All friends of Verna or her family are welcome and invited to attend. Memorials in Verna's name may be made to the Ephrata Senior Center.

Our beloved mother, Verna Marie Slough, was taken ill on Mother's Day, May 10, 2015 and soon passed away June 1, 2015 at Central Washington Hospital in Wenatchee, eight days before her 94th birthday. She was born June 9, 1921 in Hillsboro, North... View Obituary & Service Information

The family of Verna Marie Slough created this Life Tributes page to make it easy to share your memories.