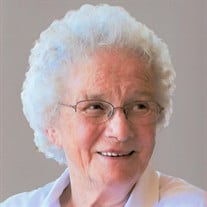 VERNEL (Bartholomew) MELBYE-HELFRICH Vernel Melbye-Helfrich, 86, resident of Ephrata, Washington, passed away peacefully April 28, 2019 on her farm that she resided for 50 years. The oldest of six children, Vernel was born on July 30, 1932, to Frank Vernard and Hannah Bartholomew in Los Angeles, California. As a young child the family moved to Edgewood Washington. The family would move between Edgewood and Tonasket, Washington. As the oldest, Vernel took on the role of helping raise her siblings. She graduated from Fife High School in 1950. In 1951, Vernel married, Donald Melbye and in 1956, the couple moved to Graham, Washington and then to Ephrata, Washington in 1969. Vernel was a wonderful homemaker, dedicated wife and mother to four children. As a young woman, Vernel was involved with her church sewing circle and also took on the role as a 4-H cooking leader. She enjoyed entering fair competitions and won many canning and baking awards. She enjoyed gardening, sewing, quilting, knitting, crocheting and took pride in her home which was known for being very neat and tidy. She is preceded in death by her husband of 50 years, Donald Melbye; husband of 14 years, William P. Helfrich; youngest son, Mark Melbye; brothers Richard and Bryce Bartholomew and sister Janice Hutton. Vernel is survived by her oldest son Michael H. Melbye (Karen) of Cle Elum, WA; daughters Donna Ebberson of Kihei, HI and Cindy Greenwood of Vancouver, WA; brothers, David and William Bartholomew; sister-in-law Suzi Bergfalk; grandchildren, Faith, Heidi, Troy, Erik, Autumn, Eli, Shetawn and Jerad; 18 great-grandchildren and many nieces and nephews of whom she loved dearly. A memorial service will be held at Nicole’s Funeral Home, Ephrata, WA at 1pm then proceeding to a graveside gathering at the Ephrata Cemetery. Family and friends are invited to attend a Celebration of Life for Vernel at the Bread of Life church 140-14th Avenue NW, after the graveside. Nicole’s Funeral Home is in charge of arrangements.

VERNEL (Bartholomew) MELBYE-HELFRICH Vernel Melbye-Helfrich, 86, resident of Ephrata, Washington, passed away peacefully April 28, 2019 on her farm that she resided for 50 years. The oldest of six children, Vernel was born on July 30, 1932,... View Obituary & Service Information

The family of Vernel Ann Melbye-Helfrich created this Life Tributes page to make it easy to share your memories.