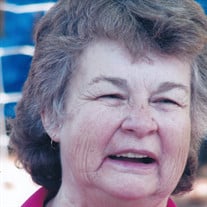 Wanda May Brunette went home to the Lord on June 2, 2015. She was born 5/19/1944 to Clifford and Genevieve Pittser in Coulee City. She graduated from Coulee City High School. Wanda married Carl Brunette on February 5, 1984. They lived in East Wenatchee for many years and raised their children, Doug Cook and Carl Brunette Jr. Wanda worked at Central Washington Hospital in the pharmacy and then later in the administration office. Later they moved to Soap Lake and Wanda did upholstery from home, working on furniture, autos and boats. She worked as a Ducks Unlimited volunteer for over 15 years and promoted Carl's Impostor Goose Call, attending sports shows throughout the country. She and Carl traveled to Alberta, Canada every fall for several years, where he guided goose hunts while she cooked for the hunters. She loved to cook and bake--she was known for her "hammered duck" and dinner & cinnamon rolls. She loved to camp and fish with the end result a huge fish fry with homemade fries. Wanda was an accomplished trap shooter, fly fisherman and her favorite fishing was for small mouth bass. In 1999, the moved back to East Wenatchee to help her mother after her dad's passing. Wanda took over the running of her mom's Ceramic Shop and spent hours every day working with the "Ceramic Girls" and painting, firing, pouring and giving lessons and advice. She taught hundreds over the years in the arts of ceramics, with one of her latest, a preschool class making Mother's Day gifts. She was always busy and had several projects in progress at any given time. She crocheted and knitted or painted ceramics while watching sports on TV. Her favorite was Tennis matches but she also enjoyed football, baseball and car racing. She knitted over 100 stocking caps to donate to the Apache Reservation in White River, AZ last year and was working on baby afghans to send this year. Wanda was a giving, caring, big hearted person who had never met a stranger. She always found a way to help anyone in need and was willing to jump in and do what needed to be done. She worked tirelessly on any cause that she felt worthwhile and to her, they were all worthwhile. She gave endlessly as much as she was able and all of herself. She is survived by her husband, Carl at home, her sons, Douglas Cook, wife Suse and Carl Brunette Jr, wife Luz (Patty), three grandchildren, aunts, uncles, nieces, nephews and cousins and all of her "Ceramic Girls". Wanda was preceded in death by her parents Clifford and Jenny Pittser, brothers, Gene and Grant Pittser, daughter, Caroline Brunette.

Wanda May Brunette went home to the Lord on June 2, 2015. She was born 5/19/1944 to Clifford and Genevieve Pittser in Coulee City. She graduated from Coulee City High School. Wanda married Carl Brunette on February 5, 1984. They lived in East... View Obituary & Service Information

The family of Wanda May Brunette created this Life Tributes page to make it easy to share your memories.