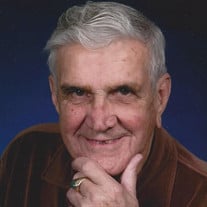 Life is a gift. The miracle and mystery of life is the greatest gift any of us will ever receive. And the best way that we can express our gratitude is a life well lived. Bill Korach-- husband, father, businessman, community leader, and Christian--lived his life well: with integrity, humility, caring, and great love and compassion. He passed away at age 93 Tuesday, February 3, at McKay Health Care Center in Soap Lake, WA. William John Korach was born in Crosby, Minnesota, the second child and first son of Marion and Violet (Jenkins) Korach. He grew up in Crosby among families of other immigrant iron ore miners, starring on the Crosby-Ironton football, basketball and track teams before graduating with the class of 1939 and relocating to the East Coast. His high school sweetheart, Phyllis Archibald, traveled by train to meet him in New York, and they were married there on the eve of Pearl Harbor. Bill joined the Army Air Corps and Phyllis followed him from base to base in Arkansas, Texas, New Mexico and the Dakotas. Their first son was born in 1945 in Seattle, where Bill began his insurance career with American Surety Company shortly after leaving the Air Corps with the rank of Captain. The family moved to Spokane in 1952 when Bill was promoted to Resident Special Agent. A second son was born before they returned to Seattle, where Bill was appointed Branch Assistant Manager in 1954. Bill moved his family to Ephrata in 1955 and acquired part ownership of the Hal Peterson Agency. In 1964 he purchased Peterson’s interest, and it became the Bill Korach Agency until 1966, when a merger with Dick Canfield formed Korach & Canfield Insurance, Inc. In September 1984 ownership of the agency passed to Larry Korach and Bob Wilson and became Korach & Wilson Insurance, with Bill continuing as an active member and guiding hand in the partnership. Believing strongly in the importance of community, Bill Korach was actively involved in leadership roles. As a former athlete, he was a champion for youth sports, not only for his own sons, but for all young people. He coached youth basketball as well as acted as player agent for both the Little League and Babe Ruth programs for thirteen years. He served the community with the Ephrata Chamber of Commerce for over 40 years, including as president. A Rotary Club member for 35 years, he was club president in 1965-66. He was active in the United Givers of Ephrata program for 30 years in roles from allocation committee to president. He was on the City of Ephrata Planning Commission for 8 years and on the Grant County Disability Board for 8 years. When he and Phyllis built a new home on the golf course in the early ‘90s, Bill became president of the Homeowners Association. Bill and Phyllis loved to travel. One of Bill’s favorite gifts to Phyllis for Christmas or their September birthdays was a pair of airline tickets to somewhere in the world with the imperative, “Let’s Fly Away!” They spent vacations and many of their retirement years enjoying tours and cruises in Europe as well as traveling throughout the U.S. They attended three baseball World Series, experiencing the 1989 earthquake at Candlestick Park. They reveled in their sailing trip to the South Seas with two other couples from Ephrata. Another highlight was a trip to the Korach family homeland in Yugoslavia before the Bosnian War, which destroyed much of that homeland and severed family ties. And always, most importantly, there was family. Bill was preceded in death by Phyllis, his wife of 71 years, his parents, two sisters, and a brother. Surviving are his two sons, Dr. Bill Korach (Ricky), retired superintendent of schools in Lake Oswego, Oregon, and Larry Korach (Theresa Fitzgerald), retired insurance broker, of Ephrata; four grandchildren: Kelly Korach (Hiroko), Kira Maloof (Josh), Jamie Cook (David), Shane Korach; and seven great-grandchildren. Also surviving are his youngest brother Pete of Michigan, his youngest sister Shirley Ann (Abrahamson) of Minnesota, and several extended family members. Services will be at St. Rose of Lima Catholic Church in Ephrata on Friday, February 20, with recitation of the Rosary at 1:30 p.m., followed by the funeral mass. Interment is private. Memorials may be made to St. Rose of Lima Catholic Church. Please express your thoughts and memories for the family at www.nicolesfuneralhome.com. Arrangements are under the direction of Nicoles Funeral Home of Ephrata, WA

Life is a gift. The miracle and mystery of life is the greatest gift any of us will ever receive. And the best way that we can express our gratitude is a life well lived. Bill Korach-- husband, father, businessman, community leader, and Christian--lived... View Obituary & Service Information

The family of William John Korach created this Life Tributes page to make it easy to share your memories.

Life is a gift. The miracle and mystery of life is the greatest...