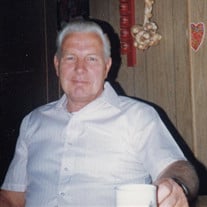 William David (Bill) Shelor 93, of Soap Lake Washington went to meet his Savior' Jesus on Tuesday, May 7, 2019 at home with his loving wife, Bonnie by his side. Born on December 14, 1925 in Washington DC, he was the son of Joe H and Grace V Shelor. William joined the US Navy when he was 17 years of age and he served 4 years during World War II, Three years aboard ship. Retiring from the Navy he returned home to Olympia to be with family and then joined the US Airforce in January 1954. He served as an Flight Engineer Technician and lnstructor and pilot until retiring in August 1973. His attention to detail and job knowledge made him an outstanding flight engineer and responsible for the high degree of success in thousands of missions. That attention to detail followed him throughout his life. While stationed in Hawaii he married Gunbrit Anderson in 1963. Upon retiring they enjoyed traveling in their motor home. They were married for 44 years until her death. William was a kind and loving man, especially around children and animals. He took great joy in sharing what he had with others. In July of 2018 William married Bonnie Jean Bean his late in life love and moved to Soap Lake, WA. William appreciated the new friends he made and loved the quietness and sunshine of the area. He was proceeded in death by his first wife Gunbrit and brother Joe Shelor. He is survived by wife Bonnie J Shelor, sisters Virginia Watkins, Pensacola, FL and Jean Heidal, Olympia, WA, brother Tom Tischer (Ann) Olympia, WA, Daughter Sandy Davis (Bob)' Orting, WA and son Bill Ray, Nampa ID, several nieces and nephews and special friend Karen Jimerson. A tribute to William's life will be held at Mt View Funeral Home, 4100 Steilacoom Blvd SW, Lakewood, WA. on May 18, 2O19 at 11:30 a.m in the Garden Chapel. Graveside service will be at 1:00 pm at Mt. View Cemetery. Memorial contributions may be made to the charity of your choice. Please express your thoughts and memories for the family while visiting the online guestbook at www.nicolesfuneralhome.com. Arrangements are under the direction of Nicoles Funeral Home of Ephrata, WA.

William David (Bill) Shelor 93, of Soap Lake Washington went to meet his Savior' Jesus on Tuesday, May 7, 2019 at home with his loving wife, Bonnie by his side. Born on December 14, 1925 in Washington DC, he was the son of Joe H and Grace V... View Obituary & Service Information

The family of William David Shelor created this Life Tributes page to make it easy to share your memories.